This race really snuck up on me this year. Not in the sense that I was not prepared but just in the sense that the year is flying by and I feel like I just started training a few weeks ago! Luckily, that wasn’t the case because if it was I would have been no where near as prepared as I was.

Race day morning started as all of my mornings start, with breakfast. I made my usual – 2 whole wheat waffles with almond better. I also had an apple and a white chocolate covered strawberry from Shari’s Berries courtesy of my bestie! I also made myself a mug of Island Coconut coffee with almond milk. Once food was consumed and my tri bag was double checked for all of the essentials, I headed out the door at 6:50 am. 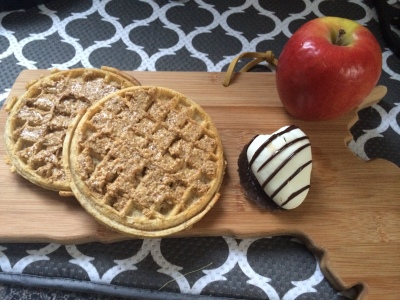 It forecast called for a perfect spring day so I opted to wear shorts and tank for the race…and of course my swim suit. Turns out it was closer to a summer day, heat wise, but that didn’t bother me at all. I’ll take the heat over the polar vortex any day!

After checking in I made my way to the transition area to claim my spot. I was #122 this year which put me right in the middle of the pack. I know people die to have the perfect corral spot for their transitions but for me, its really no big deal. I’m not out there to win. I just wanted to beat myself!

The transition area was busy but not packed as I got my spot set up. Before I knew it they were calling to have everyone begin to clear out the transition area! Yikes…had to speed up and unpack my stuff. In my rush, I neglected to take all of the pictures I wanted to take. But I still got one good shot. 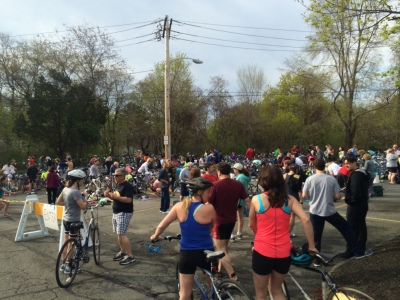 Inside, the pool area was crazy, as it always is! I realized a little too late that I should have brought my phone in to take pictures but again, in my rush, I didn’t think about it. Promptly at 8:00 am the race director started the countdown and as the horn blasted the first swimmer was off. The swim portion of the triathlon is completed in the pool. Each participant starts 30 seconds after the competitor before them and snakes the pool to complete 10 laps. 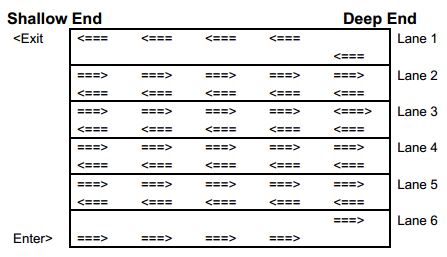 I got a little nervous before I was about to start but as I got closer to pools edge, I calmed down. The swim part of the race goes by so fast and I love swimming so there is really no need to be nervous at all. The timer guys called my number, I jumped in and I was off!

I had a great swim! I had to pass one person and no one needed to pass me. A win-win. May swim time turned out to be 5:24, which included part of my transition out of the pool. Next year I think I will post a quicker swim time (every year I have put in 5 minutes) so I can get a lower start number and really challenge myself to swim faster.

I feel like I had a decent transition time come from the pool but I forgot to grab my Clif Shot Bloks. A rookie mistake for this race veteran. I also wish I had taken a few seconds to get my RunKeeper app set up to track my ride. I think I would have been able to push myself a little more if I knew my pace.

I was not thrilled about forgetting my fuel but I pushed on. My water bottle was filled with a 1:1 Gatorade to water mix so I had a few cals in there to sustain me. The bike is my worst triathlon event. I am willing to bet its because I practice it the least. My goal every year is to take my bike out of the basement before the day before the race and ride. Yet again, I failed at that this year.

It was so cold for so long that biking outdoors was just out of the question for me. Pedaling away on the stationary at the gym does not come close to getting my bike legs ready for this hilly course. I finished the 10 mile course in 49:53. I felt slow and at a whopping pace of just 12.6 mph, I was slow! I can’t blame having two flat tires like last year though!

Although I felt a little defeated by my lack luster bike ride, I was ready to kill it in the run. My plan – Start as fast as possible and maintain. In year past I started out slow for some reason. Did I think I was going to be able to miraculously speed up? Who was I kidding? Just myself I guess.

After ditching my bike, changing from my serious bike shades to my fun running sunnies and GRABBING MY SHOT BLOKS, I was off like lighting. Well, not that fast but fast enough. I know this course well enough to know the first mile is the worst. It is flat and straight. Ho hum! I knew if I pushed hard and ran “fast” through the first mile I would be golden.

There were water stops everywhere and I made sure to try to hydrate because it was getting HOT. I am pretty awful at drinking from those little cups while running and I refused to walk so I ended up wearing most of the water instead of drinking it. Still refreshing!

I still felt strong at this point and knew I had just 1 hill and 1.5 miles ahead of me before finishing this race for the 5th time.

Wow! A negative split on the last mile of a triathlon?? Who am I? Not sure but I’ll take it! Oh, and there was a gigantic hill at about 2.75…no big deal (huge deal).

Another big hill here before crossing the finish line. I also heard a familiar voice yelling my name…SL was there to cheer me on! I finished the race in 1:27:31. Not a all time best but better than the past two years! One of my goals was to break a ten minute mile for each mile on the run and I did that with ease! I was really proud of that little feat.

DONE AND DONE with another JCC Triathlon by the Sea!